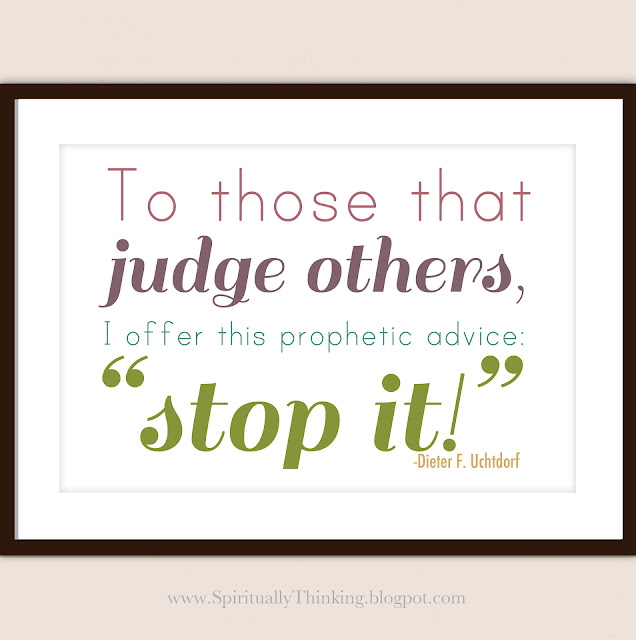 Note: I wrote the outline for this back in June, when April’s conference talk was obviously much more on my mind.  However, finishing off this post apparently took a backseat for awhile and I only just re-discovered the draft.  Please accept my apologies for being so delayed in posting this.

In April’s General Conference President Uchtdorf related a story at the beginning of his talk of a mother who had requested that he speak on a particular subject.  She had two children who were estranged from one another and she wrote to President Uchtdorf  saying that if he would just speak on a particular topic that her children would be reconciled.  President Uchtdorf said that among other things that letter had prompted him as to what to speak about.  He also said before beginning his talk “Dear sister, I pray that the Spirit will touch your children’s hearts.”

I was so touched that of the multitude of topics he could have chosen to speak on, to a church of millions of people, this good man directed his comments to one particular sister and her two children.  I felt like the request was a bit audacious to feel like your children’s fight warranted the intervention of someone of such standing who doubtless had many other things to do.  However, I was more impressed with President Uchtdorf’s fulfillment of the request, regardless of audacity.

Tonight we read the book of Enos.  In this single chapter book we read of a man’s prayer for his nation, his enemies and other things.  One of the particular things Enos requests is the preservation of his people’s records.  I couldn’t help but think, what if the only reason we have the Book of Mormon today is that this one man had the audacity to ask the all-powerful, all-seeing, surely busy God to look out for the things he and his people had written?  Surely he could have thought – if the Lord wants our records preserved, he’ll preserve them and I don’t need to ask for it.  But he didn’t.  Rather than just seeking for his own personal forgiveness and things that he could control, he put his faith in God and had the faith that his own requests – however small or insignificant – were being heard by one who has the power to fulfill those requests.

In the Bible Dictionary we read –

“Prayer is the act by which the will of the Father and the will of the child are brought into correspondence with each other. The object of prayer is not to change the will of God, but to secure for ourselves and for others blessings that God is already willing to grant, but that are made conditional on our asking for them. Blessings require some work or effort on our part before we can obtain them. Prayer is a form of work, and is an appointed means for obtaining the highest of all blessings.”

What if Enos had neglected to perform that work and because of that we didn’t have the Book of Mormon today?  Perhaps the simple prayer of this one man have since affected millions of lives.  What if that one woman hadn’t taken the time to ask President Uchtdorf to speak to her children?  Perhaps this wonderful talk, which is so needed in our day, wouldn’t have been given.  Maybe we would have heard more about airplanes, or something else.  I’m sure whatever else President Uchtdorf could have spoken on would have been wonderful, but perhaps not this often quoted, well beloved talk that we were blessed with back in April.

This made me wonder, what blessings am I being denied simply because I don’t have the faith to ask?  I have a new resolve to strengthen my prayers and pleadings in behalf of those I care about, our nation and our world. I think our prayers have more power and import than we realize and we need to be diligent in using it to benefit the world.