On Friday my little brother Cody opened up his mission call!  I can’t believe he’s old enough to be going on a mission but I’m very excited for him.  Since missions are obviously a topic that gets discussed a lot around our house right now I wanted to make it the topic of a Family Home Evening lesson for my kids.

I looked around the internet to see if I could find a lesson that was like what I wanted to do, but nothing quite fit the bill.  What I really wanted to do was discuss how mission calls are made and talk about what missionaries really do.  Since we have really young children this seemed like a good building block to have.  Most of the lessons I saw were about sharing the gospel, which is awesome just not what I wanted to do.  So I decided to make my own.

I put together a lesson plan but what I really wanted was to have a flannel board story to go along with it (that format works really well for our kiddos).  I searched high and low to find the type of clip art graphics that I wanted but really didn’t come up with anything.  I found one picture that I really liked but nothing that matched it.  So I decided to take the picture I’d found and use it to create my own clip art to fill in the rest.

(P.S. – I spent a lot of time coming up with the clip art so I feel the need to share the whole story, if you just want the fruits of my labors the lesson plan and graphics links are at the end of the post, feel free to skip the whole story 🙂 )

This is what I started with: I decided the missionary on the right would be the easiest to work with since he didn’t have a helmet on and already had hair.  So I cut him out, stole the other missionary’s left arm, took off his backpack and his tag and… Voila!  Now I have a pre-missionary who is ready to meet with his bishop.  Of course, that means that next I’ll need a bishop.  So I doubled that missionary, turned one copy of him to face the other way, added a door in the background and got to work editing one of the copies so that he could look like a different person than the original missionary (a little weird for him to interview himself to go on a mission).  I changed his skin tone a little, got rid of the Mormon wave, smooshed his head, changed his mouth, added a jacket (that was definitely the hardest part), and tried to make them look like they’re shaking hands.  I got pretty far through this process and then realized I had a problem – I had accidentally amputated the bishop’s left hand!  Crap.  Eric also pointed out that I was having them shake hands very awkwardly, the Bishop’s hand should be on top instead of the prospective Elder’s.  A few more changes and… Tah-dah!  Now he looks like he’s ready to give out mission calls.  This whole process was HARD (I’m not very artistically inclined, if you can’t tell from my Photoshopping efforts).  So I decided to dig a little more for some clip art that might match.  I found the original picture at MormonShare.com and it indicated that it had been submitted by Jenny Smith, but a perusal of Jenny’s site seemed to be a mirror effort of what was on MormonShare.  I had left a comment with Jenny to see if she could help me find more similar clip art, but I wasn’t too hopeful.  Then I noticed that while the image had been *submitted* by Jenny Smith, the artist listed was Arie Van De Graaff.  A quick Googling of that name led me to his website – The Mormon Cartoonist.  Jackpot!  I emailed Brother Van De Graff to check if it was ok if I posted my finished product on my website (it was) and if he had any ideas on where I could find some of the other pieces I was looking for.

While I waited for a response I went to Google Images and now that I had an artist name for the pictures in question I had a lot more success.  The next thing I wanted to make was a picture of an apostle reviewing the prospective missionary’s papers and issuing a call.  Not an easy bill to fill, mostly I was interested in finding someone sitting in an office chair since that was a piece I wasn’t keen on creating myself.  I found this – 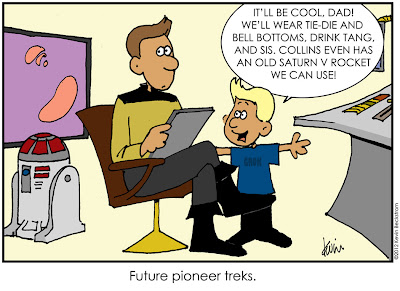 Which I actually only just realized is not by Arie Van De Graff, but by Kevin Beckstrom, but he mentions Arie on his blog post so it came up in my search.  Anyways, I took the adult trekkie, turned him around to face the computer screen, shaved his head, put him in a suit, gave him a smile, and put the missionary’s information on the computer screen and… Tah dah!  Our Trekkie is now an apostle!  The funny thing was I was having a hard time finding a scribble that I could use for the writing on the computer screen.  I didn’t want to have to come up with actual text, and drawing scribble text with a mouse is harder than you might think!  I had to go and find that scribble on someone’s MySpace page, and then I shrunk it and pasted it over and over 😛  Go figure.

My next step was to make a picture of our missionary receiving his mission call.  This is where I struck gold!  I found this digital coloring book which had almost all the rest of the images that I needed.  Plus, it was illustrated by none other than Brother Van De Graaff himself, so the theme fit perfectly.  Strangely enough the picture for the MTC actually came from the coloring book for The Proclamation on the Family, but it worked.  I put my missionary into all of the pictures and got the rest of my pictures – So, if you survived through my long story of how I got all my graphics you definitely deserve to have a copy of this lesson.  I don’t promise that it’s the most amazing and life changing lesson, but I’m excited to do it with my boys next week (obviously I kinda missed getting it done for this week, even though I started on Monday with that intention 😛 )  I think it’s probably good if you have very little boys like I do.  I got some of my ideas from this FHE Lesson at A Year of FHE and I plan on printing out her map as well as the missionary tags to go along with the lesson.  So without further ado –

Let me know what you guys think of the finished results!  I’d love to know if there are things you think I ought to fix or change!

One thought on “I Want to Be A Missionary Now”