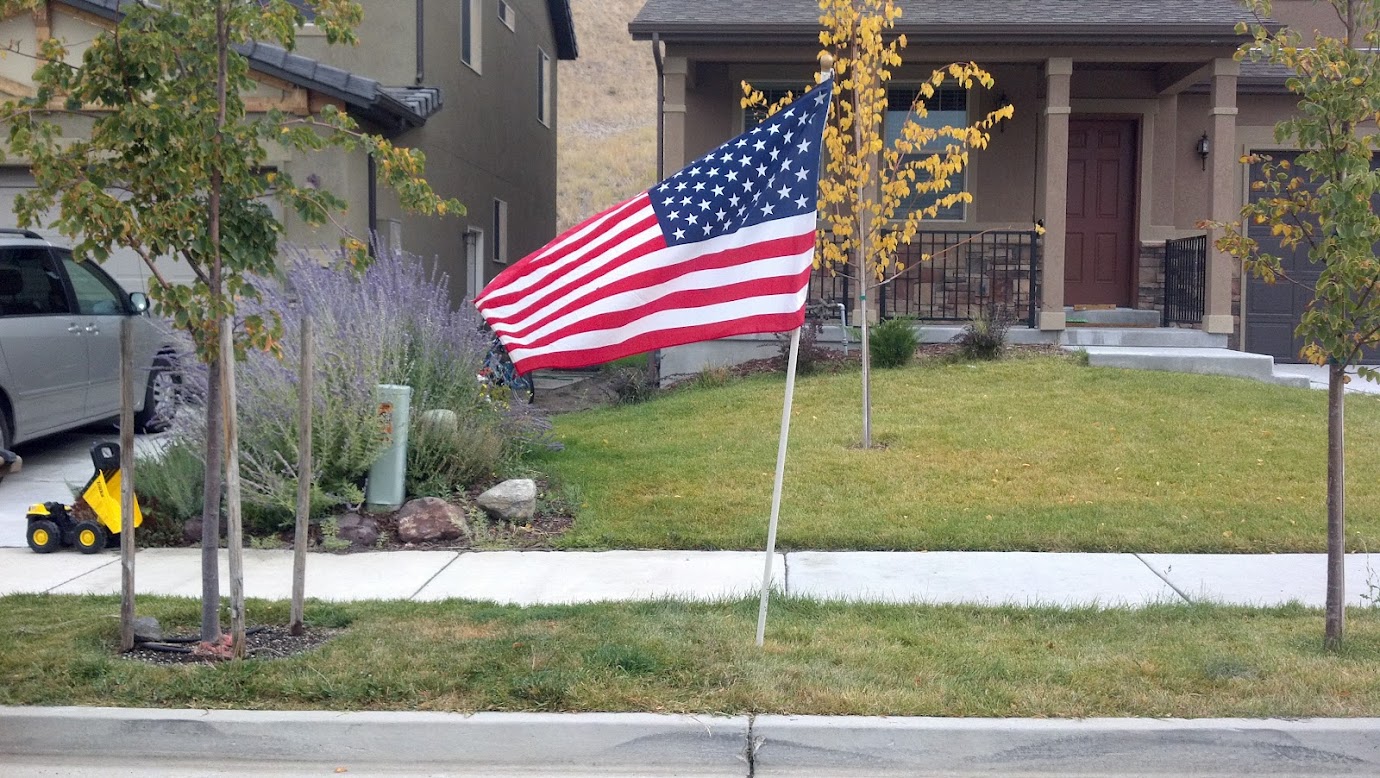 Let me tell you about a different Tuesday, September 11th, the one that happened 11 years ago. That day there wasn’t a flag in our yard, I was 15 years old and it was a school day just like any other.  I woke up very early that morning for seminary and I was probably late as usual.  It was pretty early in the school year and we were still excited for the year ahead.  After seminary I carpooled with some friends to the school.  Because I was in the early seminary class, but didn’t have a first period class I wandered over to the cafeteria where I would hang out with some of my friends before school and usually try to catch up on some homework.  When I walked in I saw my friend Whitney and I bounced over and cheerfully asked her how she was doing. When she looked at me her face was shell shocked and blank, I could tell immediately that something had happened that had caused her mood to be much different from my own.  She told me, “They bombed the World Trade Center.”

At the time those words didn’t mean much to me.  I didn’t even know what the World Trade Center was or who “they” were or anything.  As she tried to explain some of what was going on we decided to walk over to the library to see if the librarian, a lady we also happened to know from church, would let us watch some of the news coverage from there.  It was a little while before she got there but when she got in we turned on the news to see this –

At 8:46 am EDT an airplane that had been hijacked by terrorists had been crashed into this tower in New York City.  At the time there were two towers side by side that were the tallest buildings in the city where many people worked every day.  It was totally stunning to see.  Since I lived on the west coast this had happened at 5:46am my time, so all this had happened while I was on my way to seminary.  While I was beginning my day other people were ending their lives.  Then while I was sitting in seminary that morning another plane had been hijacked and crashed into the second of those two towers.  At 9:37am EDT, while we were wrapping up our seminary lesson for the morning, yet another plane had been intentionally crashed into the Pentagon.  At 10:03 am EDT, while I was on my way to the cafeteria to talk to Whitney, yet one more plane had crashed, this time, due to the bravery of some civilian passengers, it crashed in a field rather than into a high profile target.

By the time I was even hearing about what had happened, the whole attack was over.  But at the time we didn’t know this.  I was worried, where I lived was close to the big city of Los Angeles.  If these things were happening in New York City I wondered what might happen much closer to home.  That day in school, most of our classes suspended instruction in favor of watching the coverage on these attacks.  We watched as they worked their best to evacuate as many people from those buildings as possible, and we watched as the buildings then came crashing down trapping many people inside and pushing the debris out for a long ways around.  The story was vastly significant.  New York City is one of the biggest cities in our country and almost everyone knows someone there.  My dad had done business in the World Trade Center on many occasions.  Your dad stood at the top of one of those buildings only a month before this happened.  One of my best friends had returned from New York City only the night before.  Across the nation people were concerned about loved ones and what might have happened to them in these awful events.

The FAA decided to ground all air traffic for the next few days while they sorted out what happened.  One of my best friend’s parents were stranded in Utah and couldn’t come back because of the flight cancellations, so she ended up coming over to our house that afternoon.  I don’t think you will ever truly be able to comprehend what happened in the following days unless another event of similar magnitude happens within your lifetime.  I pray you won’t have to endure such an awful experience, but actually it wasn’t all terrible.

Yes, the people that we lost and the sense of security that was lost were horrific, and not the sort of thing you would ever wish upon anybody ever.  However, there was a silver lining to it as well.  In the days and weeks that followed everyone seemed a lot more caring of one another.  I remember being in check out lines and seeing cashiers ask how people were doing, and truly were wondering if they were withstanding these events well and how they were holding up.  “How are you” became not just a rote question that we asked each other out of politeness, but out of a genuine caring for our friends and neighbors well-being.  We all went home that night and hugged our families a little bit tighter, and thanked God for those in our lives who we were so privileged to love and still have with us.  People were more humble and the churches found higher attendance than they’d seen in a long time.   But at the same time, we were proud as a nation.  The American flag was hung from every door and we were proud to be Americans.  Our president said we would find those responsible for the attacks and bring them to justice.  President Bush gave this speech to our nation and even reading it today I’m moved by the words because I remember from whence they sprang.

In the weeks that followed there was lots of coverage given to the heroes of that day.  In the hours between the impact of the airplanes and when the towers fell down, hundreds of firefighters went into the twin towers and rescued many people from the buildings collapse.  Medical personnel showed up on the scene to treat those with injuries.  Policemen did their part to close off the area and help get people out of harm’s way.  The passengers on Flight 93 heard about the catastrophic events that had unfolded that day and bravely stood up to the armed hijackers preventing further harm.  Nationwide people were trying to find ways they could help.  There were many blood drives and candle light vigils.  It was a time of tragedy, but also a time when we were proud to be part of this great American nation.

Our school held a fundraiser for the families of firefighters who had been killed in the collapse of the twin towers.  I bought a metal bracelet  that had the words “We Will Never Forget” on it that I wore for the next several years. And it’s true, I will never forget the events of that day.  My 15 year old mind was given a lot to think about that day and in the days to follow.  Thoughts about mortality, safety, care for our fellow man and what it means to be an American.  However, you cannot ever truly remember the events of that day.  However convincingly I word my thoughts on that day, you weren’t there and therefore cannot fully understand what these things meant to those of us who were there.  You won’t really understand why we have to take off our shoes in the airport, or why we can’t bring liquids on airplanes.  You don’t understand the relief that it brought when we heard that SEAL Team Six had *finally* gotten Osama bin Laden.  You can’t comprehend exactly why we allowed things like the Patriot Act to come into existence.  I won’t say that all of these things were the right thing to do, but I will say that I understand why we did them.  There was once a Tuesday that should have been exactly like any other Tuesday, just like the Tuesday we’re having today, but that day the whole world changed.

I hope that one day you can understand the pride of being an American citizen and feel the gratitude we have for the men and women who defend the rights we have as a nation.  We are blessed beyond measure to have the freedoms that we enjoy and we should be grateful for it every day.  That is why we have an American flag in our yard today.

One thought on “The Flag in Our Yard”