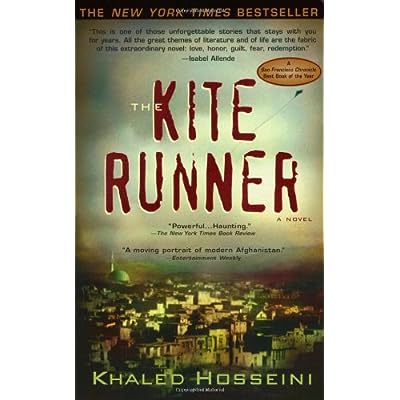 I just finished listening to The Kite Runner by Khaled Hosseini

.  If you haven’t read it before and you’re someone who enjoys reading I highly recommend it.  It’s an interesting story about a young man who grew up in Afghanistan when the Soviet Union invaded and took control of the country.  He flees with his father to America and returns later during the Taliban rule.  I don’t want to give too many details because I think the fun of reading a book is experiencing it for yourself (ironically this is discussed in the book as a very American attitude).

Coincidentally I also recently challenged myself to read through the entire Old Testament as it is the one book of scripture that I can’t say I’ve read cover-to-cover.  I’m pretty sure I’ve read almost all of it at one point or another, but I can’t actually say I’ve read every page so I’m working towards that.  I haven’t made it very far and I just read last night most of the story of Abraham (Genesis 15-21).  Reading that story while listening to a book about the unrest in the Middle East and the Muslims there led to some interesting thoughts which I figured I’d write about here.

One of the first things that struck me is that if Sarah hadn’t given Hagar to Abraham to wife, none of the problems in the Middle East for the past thousands of years would have ever taken place.  Which makes me wonder if the world would have been better off if Sarah hadn’t done that.  The whole feud between Muslims and Jews wouldn’t have existed because there wouldn’t have been any Muslims to begin with.  I’m not trying to say that the world would be better off without Muslims, just that the way that Sarah and Hagar dealt with each other afterwards has created an animosity between those two peoples that has endured through many centuries.  Perhaps under different circumstances Hagar would have married another man within Abraham’s camp, raised those children peacefully alongside Issac and everyone would have lived happily ever after.  I know that’s a big what if and it doesn’t even do any good to speculate on that issue, but I had a different insight that I thought *was* worthwhile to think about.  What if Sarah had kept her faith in God that He would keep His promise to Abraham and herself rather than doubting and giving her handmaiden instead?  Perhaps all of the turmoil that has happened ever since that point could have been avoided by exercising greater faith.

I’m not necessarily saying that what Sarah did was wrong, perhaps she was even commanded to by the Lord (which was what I had thought originally, but in reading through last night I didn’t see indication of that, please let me know if I just missed it).  I definitely think that it was a HUGE sacrifice on her part to give another woman to her husband to wife.  I’m probably too jealous of a woman to do that myself.  However, it was just a reminder to me to have even greater faith in what the Lord is capable of and allow him to do great things through us.  I think a great example of the converse is Nephi.  When the Lord asked him to build a boat he didn’t ask where he could find a boatmaker, he asked where to find ore to make tools and then let the Lord make him into the boatmaker.  It made me wonder in what ways I’m limiting the Lord’s power to make me into an even better person by accepting things as they are.

By the way if you’re interested in another book about Abraham and Sarah one of my very favorite books that I’ve read recently is Sarah: Women of Genesis by Orson Scott Card, it was excellent and I recommend it even more so than Kite Runner, but obviously they’re totally different books so it depends on what you enjoy reading 🙂

The other thought that I had was how much we are all really the same.  If you look at Christians, Muslims and Jews we think of those religions as being SO different.  However, we each branch off at tiny intersections.  Muslims and Jews came from the same spiritual heritage, are both the offspring of Abraham.  They just branch a little bit when Ishmael and Hagar are sent away from Abraham’s camp, but still at the roots and essence of Islam, they believe in basically the same things, and they’re worshiping the same God although by different names and in different ways.  Again Christians and Jews come from the same spiritual heritage all the way up until the birth of Jesus.  Then we differ in that we believe Jesus is the Christ and that He has already come, whereas the Jews are still waiting for the Christ to come.  But again we’re still the same at our roots and worshiping the same God, just in different ways.  I think we can often focus too much on our differences than on our similarities.

Now, that isn’t to say that the differences that we have aren’t important.  I think one of the things I see most frequently are people who say that we’re all good so don’t worry about how we’re different.  I strongly believe that it is very significant that Jesus is the Christ, that He suffered for our sins and was resurrected and that because of Him we can be forgiven of our sins and live again.  Eric was told by many people on his mission that there are “many roads that lead to the top of the mountain”, meaning it doesn’t matter what you believe we’re all going to end up in the same place.  I do believe that The Church of Jesus Christ of Latter-day Saints is the only church on the face of the earth today that has the complete truth.  It’s why we believe in doing missionary work and that it’s so important to spread the truth to others.  What we have *does* matter, and we should be doing all that we can to share it with others.  However, that doesn’t exclude any other religion from having any truth.  Nor does it give Latter-day Saints a monopoly on God, I believe God loves all of His children regardless of race or religion and He will answer the prayers of a Muslim or a Jew or anyone else as readily as a Christian, so long as they’re asking in faith and with righteous desires.  Most importantly I don’t believe that people are simply damned for not accepting the fullness of the gospel in this life.

What I believe is best expressed in C.S. Lewis’ book The Last Battle

(I know, lots of different book references today, what can I say, I love reading ;).  In that book  there is a young man who is a Calormene (i.e. not a Narnian or the equivalent of Christian) and he fights vehemently throughout the book for Tash (the Calormenian god) against Aslan and the Narnians.  At the end of the book **SPOILER ALERT** everyone dies and they have “judgement day”.  When they get to judgement day the Calormenian young man steps aside with Aslan for a little bit and they have a conversation where Aslan basically says – you missed it by a little bit and were fighting for the wrong side, but your intentions were correct, you are a noble and just person and if you will accept this path you still get to come and live in Aslan’s kingdom.

That’s the best explanation I can think of for how I believe things are going to be on the other side.  Yes, I think it’s absolutely important that Christ is the Savior of mankind and that the pathway to eternal life and exaltation means that we need to accept His atonement in our lives and do those things that will help us return to and become like Heavenly Father.  But if you were a faithful and good person in this life I fully believe that in the next life you’ll be told – you’re awesome, way to be faithful, here are the steps that you need now to gain eternal life and exaltation.  It’s why we do work for the dead in temples.  It’s not to force our faith upon people who have passed on or to tell those people that they were evil.  Quite the contrary, it’s simply to give them the opportunity to accept those things they might not have known before and have the chance to progress onward.

Which isn’t to say that it isn’t important to accept the gospel in this life if given the chance.  I think one of the most important things to realize about what happens on the other side is that we will still be the same people we are now – just dead.  We won’t suddenly be a completely different person with different desires or abilities.  If you weren’t going to accept the gospel in this life and feel inclined to do those things that the gospel requires, you aren’t likely to do so in the next life. (See Alma 41 for a more eloquent explanation of this)

Anyways, I know a lot of this is fairly off topic from the book itself but they’re things that I’ve thought about in the past and have meant to write down and post, this just provided a good jumping off point 🙂  As always, you can feel free to add in your two cents below.